Did Ye Get Healed 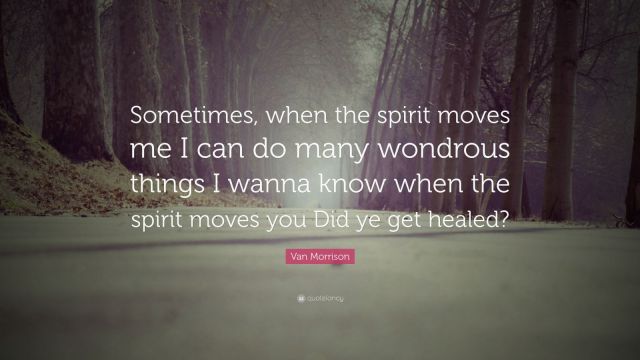 In 1987, the singer Van Morrison, best known for his song “Brown-Eyed Girl,” released an album called  Poetic Champions Compose which included a powerful song called, “Did Ye Get Healed.” You may be surprised to see that the title of this sermon does not come from the King James Bible, but from Van Morrison. According to critics, this song signaled the commitment of his music to a more spiritual direction.He sang:

I begin to realize

Magic in my life

See it manifest in oh, so many ways

Every day is gettin’ better and better

I want to be daily walking close

And what he found in his life, he wants to share with others.

I want to know did you get the feelin’

Did you get it down in your soul

I want to know did you get the feelin’

Oh did ye get healed

It is fitting that he signaled this with a song about healing. He sensed that the people who came to his concerts were in need of healing, and he wanted his music to be a place of spiritual healing for them.

The first person Jesus encounters is someone with an unclean spirit. We don’t talk much about unclean spirits these days. Back in Jesus’ day they didn’t know much about mental health. They just knew that some people had problems. Today we would not say someone had an unclean spirit. We might say they  have a mental illness, or a personality disorder, or an addiction.  We understand a lot more about how the mind works today, and we don’t try to drive demons out of people who suffer from personality disorders or mental illnesses.

But we don’t need to throw out this passage just because we don’t treat these symptoms the same way Jesus did. As I was writing this, a group of people were hanging out on the stoop just outside my door. It was clear that most of the people there had some sort of mental health issues. Now I am not a doctor, or a therapist, so I could not do anything to take away their various issues. I cannot cure them. But does that mean I have no hand in their healing process? No.

We have to remember that healing does not always imply cure. A cure is when you no longer have the malady that is afflicting you. Yesterday I had a cold. Today I do not. I am cures of my cold. An article in the magazine Psychology Today says, “Curing means “eliminating all evidence of disease,” while healing means “becoming whole.” You can cure without healing, and you can heal without curing.”

Mark describes the man as having an “unclean spirit.” I said that we don’t use that terminology these days, but too often the same sentiment is there. We see people who are mentally ill, and we turn away. We are afraid of some of the mentally ill people. When, for example, we talk about gun violence as being a mental health issue, that just gives you more reason to be afraid of the mentally ill. Like it or not there is a stigma attached to mental illness. That is unfortunate because it means that some people who have treatable mental illnesses, like depression, or bipolar disorder, are afraid to seek help because they are ashamed of the stigma attached.

So how can the church have a healing presence with people? If we cannot cure them, as Jesus did, what can we do? We can be a place of healing, a place where we do not stigmatize, do not brand people as clean or unclean. We can treat them like we treat any other person. We don’t have to avoid them. And the fact is, the majority of mental illnesses are things that are more easily hidden, like depression, or unresolved guilt, or grief. I wonder how many people in our congregation suffer from depression. From my experience as a pastor, and as someone who once worked in a behavioral health ward, I can tell you it is probably a lot more than you think. We can be a healing place by accepting people, and providing support for them. We can do away with the shame that comes from mental illnesses, and understand that people who have mental illnesses do not have moral faults, and they don’t deserve their illness any more than a cancer patient deserves to have cancer.

The next incident involves Jesus, Peter’s mother-in-law, and then all sorts of people who were sick.

Jesus goes to Peter’s house, and there he finds Peter’s mother-in-law sick in bed with a fever. So Jesus heals her. Next we see what happens when your reputation as a healer starts to get out. All sorts of people start showing up, with all sorts of complaints. And there is not telling who will show up.It can, in fact, get overwhelming. After Jesus healed all those people, word got out. And that is when he is able to travel throughout Galilee, proclaiming the message of God’s love. They knew he was serious because he was practicing what he preached.

The kingdom of God is among us, and we know it because of the people who are healed. That is true among churches today. People know when they have encountered something real. And they will show up for that!

Next Jesus encounters a leper. If there was anyone who was an outcast in his day, it would be lepers. When lepers encountered people they had to shout out, “I am a leper! Stay away!” Now the reason for this is not what you think. People were not necessarily afraid of catching the disease. Under the law, anyone with a skin disease was unclean. And if you touched them, you were unclean. That is why the man in the story says he wants to be clean, and not healed. According to the world, he was born with a disease that permanently made him an outcast. He did not choose to have leprosy. It chose him, and in so doing, it made him a pariah.

I love the next sentence. “Moved with pity, Jesus stretched out his hand and touched him.” And then he said to the man, “I do choose,” and he made the man clean. The leprosy left him. The stigma was gone. No one else would give this man the time of day, but Jesus reached out and touched him.

While we have made great advances in understanding the disease called leprosy, unfortunately we still have people who are considered outcasts by society, or worse yet, by the church. Some churches demand you have a certain level of faith before you can join. Or that expect you to believe some pretty specific things before they accept you. More liberal churches see their conservative counterparts as outcasts, while conservative churches often see their more liberal counterparts as unacceptable. This morning we are going to have communion, and sometimes before Communion, I say, “This table is open to anyone who believes in Jesus Christ as their Lord and Savior, which means that they realize it is Jesus who saves us, we don’t have to save ourselves, and since we are saved by Jesus, we might as try to do what he asks us to do.” For me those are the basic requirements, and we realize that people are in very different places on the spectrum of what that means. Some people here have been on that journey for a long time, and know pretty much what it means to believe in Jesus as a savior and to follow him. Others are beginners in that process, and are open to learning, while others thought they knew what that meant, but are going through some spiritual changes, and are challenging their old beliefs.

I have already spoken about the mentally ill, but some churches exclude people who are just different, eccentric.

I wonder who is excluded here? We do have a pretty big table here. I was talking with another pastor, and she said that churches often exclude people based on their economic status, but then quickly looked at me and said, “Not your church, of course.” I have to admit that made me proud. But I wonder who would not find a welcome here?

That is an important question, because the church is supposed to be a healing presence in the world, just as Jesus was. This should be a place where people can come to find healing. There are various models for the church, and too often the model is the Church as a Business. I tend to think of the Church has a hospital. Of course I have heard one person say that the church is the only hospital that shoots its wounded. I pray to God that we never do that.

Probably most of you don’t think of yourselves as someone who is wounded, or who needs healing. But the fact is, we all suffer at least a little of what Hamlet called the “slings and arrows of outrageous fortune.” We all get bruised along the way. We all need a healing touch, a touch of grace, a touch of love.

Many, if not most of us need some kind of healing. Our nation needs healing, for we have some deep wounds within our national soul. Perhaps you heard this last week of the increase in anti-semitic incidents throughout the country. What brings people to that kind of hate? I read of a woman who ran over a 14 year old girl, because she was Mexican. What kind of disease brings that kind of hate? And how can it be healed?

Now here is the good news. It is Jesus who heals. We are not required to heal every hurt person who walks through our doors. But we are to provide a place for them to find healing. And while we are not the ones who heal, often we are agents of healing. When someone feels rejected, an outcast, and we accept them, that can be the beginning of what Jesus is doing in their lives to heal them.

But when a church stands against hate, against discrimination, against exclusion, and when it stands for love, for acceptance, and for inclusion, it becomes a healing place for others. It becomes a place where people can experience the healing presence of Jesus. Like the people at a Van Morrison concert, who sang, did ye get healed, we could ask that question of the people who come through our doors. Did ye get healed?

I am the pastor at the First Presbyterian Church in Medford, Oregon. I believe that faith should be able to sustain us, not oppress us.
View all posts by tmrichmond3 →
This entry was posted in Church, Church Growth, Communion, Compassion, Growth, Healing, Jesus, ministry, Mission, Musings, Pastoral Ministry, Preaching, Relationships, Sermons, Social Justice, Social Ministry, spirituality and tagged Healing, Inclusive Church, Outcasts, Spiritual Growth, spirituality. Bookmark the permalink.