Hope for the Holidays 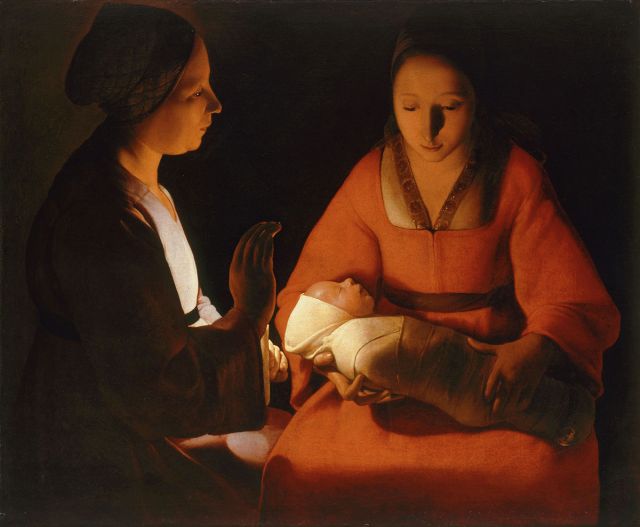 I wonder what Mary and Joseph saw when they look into the eyes of their newborn child. What did they see in the eyes of Jesus? On the one hand, they knew this was a special child, a child like no other, who had a destiny formed by God. Did they see the future shining in their baby’s eyes?

On the other hand, Jesus was just a baby. He wiggled and squirmed, and cried and cooed like a baby.

I remember looking into the eyes of my children when they were born. My daughter was first, and I saw many things in her eyes, but the major thing I saw in her eyes was hope. I thought, even just after her birth, what her future would be. Would she do well in school? Would she have boyfriends, some of whom might break her heart. Would she go on college, and would she marry and have children of her own. Would she be the first female major league baseball player? Ok, that one was a longshot, but hey, a father can hope!

I saw all that and more in her eyes.

This is a time for hope. I could list all things that are wrong with the world, with our country, with our community, but I won’t. I want to talk about hope tonight. Because I think that exactly what the world needs tonight.

South African Archbishop Desmond Tutu said that hope is being able to see that there is light, despite the overwhelming darkness. Hope is what gets us through the hard times. Hope is the light we carry inside of us. It is a passion for what is possible. It is an expectation that things can change, and that the world can get better. A parent hopes that their children can have a better life than they had. Someone in pain hopes for a day when the pain will pass. The prisoner hopes to be free, the lame hope to walk, the poor hope for wealth. The oppressed hope for a world where justice reigns. Hope is the opposite of despair. When we despair, we feel powerless, but when we hope, we feel the power of faith within us.

Jürgen Moltmann wrote, in his book Theology of Hope, “without hope, faith falls to pieces. It is through faith that a person finds the path of true life, but it only hope that keep them on that path.”

The Bible tells us that Faith is the evidence of things hoped for, so I ask you, “What are your hopes for the coming year?”

May they be high hopes. But if we are to hope, we must hope actively. When we hope in something, we invest in it. I had hopes that my child would have a good education. I didn’t just sit around and just hope passively. I bought her books, and read to her every night. I encouraged her to ask questions, and tried to answer them when she did. I was an active parent in her school. I actively followed through on my hopes with action. I was actively hoping.

Are you hoping the world can be a more beautiful place? Then actively hope for that, by singing, or painting, or writing or whatever you can do to create beauty. And if you are not the type who can create beauty, do what you can to support the people who are able to bring beauty into the world.

Are you hoping for the world to be a more joyful place? Then spread joy. Smile at the person at the DMV that just told you it will be a two hour wait, because I bet yours will be the first smile, and perhaps the only smile they see that day. Do the things that bring you joy, and invite others to do them with you.

Are you hoping for a more peaceful world? Then actively hope for that by doing your part to bring peace to this troubled world. Find someone who holds a totally different opinion on religion, or politics, or social issues, or music, or on whether or not Die Hard is a Christmas movie, and get to know them—not to convert them, but to understand them. Leave the comfort of your familiar surroundings and reach out to create a bridge of peace with someone.

Are you hoping for a more loving world? Then actively hope for that by loving your neighbor, and by loving God. Volunteer at a school, and get to know some kids. Find someone who has no family, and invite them into your family. Volunteer at a Food Bank, an emergency shelter, a soup kitchen. Be a foster parent, or a big Brother or Big Sister. Give to hospital that treats children, or to a non-profit that feeds children overseas.

Do you hope for a world with healthier, more joyful relationships? In the world where too many people spend too much time with their eyes on their phone, where 1000 of our closest friends are found on facebook, where we have lost a sense of community, actively hope for a less isolated society by joining a group of people doing something you like to do. Gather together with friends more often, and increase the circle of your friendships by inviting more people into your life.

Instead of just worrying about things, we need to actively hope. Are you worried about our environment? Then actively hope for a better world, but cutting back on the plastics you use, reduce your carbon footprint. Drive less and walk more.

Are you worried about our political system? Then get involved. Get to know your local elected officials, attend city council or county commission meetings. Write letters. This is an election season. Volunteer your time for a candidate, or maybe run yourself. But do these things with love and with joy, and embrace your opponents.

I have to warn you though. The more you hope, the less you will be satisfied with the world as it is. When you have a passion for the possible, you lose the ease of accepting things as they are.  But when you lose that, you gain an active hope in the future well being of the world. As the angels sang, Peace on Earth, Good will to all. You can only believe in their song, if you maintain an active hope.

As long as hope is alive, humanity will do well. And hope, real hope, is found in the eyes of a baby boy, born in a manger in Bethlehem, to two parents who had no roof over their heads for the night. In the deep dark night of despair, hope came into the world. It is found in the words of the boy who became a man, and who spoke the Word of God for all. It is found in the love he had for all people, in the joy he experienced by serving, in the pain of his death, but in the glory of his resurrection.

Come Kneel before the radiant boy,

Who brings you beauty, peace and joy.

It’s not too much to hope.

I am the pastor at the First Presbyterian Church in Medford, Oregon. I believe that faith should be able to sustain us, not oppress us.
View all posts by tmrichmond3 →
This entry was posted in Christmas, Christmas Eve, Hope, Jesus, ministry, Spiritual Growth, spirituality and tagged Christmas, Christmas Eve, Hope, Spiritual Growth, spirituality. Bookmark the permalink.