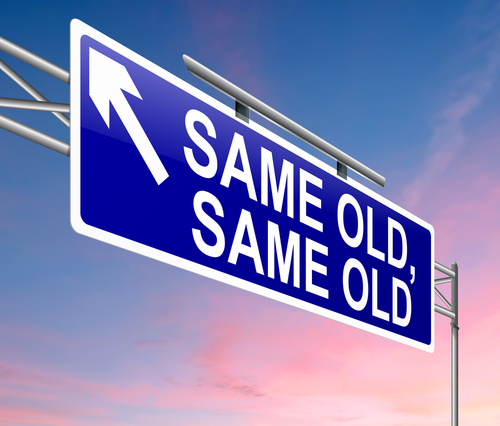 There is nothing new under the sun.
10 Is there a thing of which it is said,
“See, this is new”?
It has already been,
in the ages before us.
11 The people of long ago are not remembered,
nor will there be any remembrance
of people yet to come
by those who come after them.
12 I, the Qohelet, have been king over Israel in Jerusalem, 13 applied my mind to seek and to search out by wisdom all that is done under heaven; it is an unhappy business that God has given to human beings to be busy with. 14 I saw all the deeds that are done under the sun; and see, all is mere breath and an attempt to herd the wind.
15 What is crooked cannot be made straight,
and what is lacking cannot be counted.

Someone once said that the baby boomers (my generation) pretended to treat every phase of life as if they had just discovered it. When they were young, they pretended to invent youthful exuberance. As they aged, they pretended to invent the angst of middle age, and now they are pretending that they invented menopause and arthritis!
And yet all before them, and all who come after them go through all these phases of life. There is nothing new under the sun. The millennials who are having to deal with the economic ramifications of the 2008 recession are not much different from their great-grandparents who went through the Great Depression. Qohelet, who seems to be a person of age, sees that the circle of life does not change for every generation.
He says something that is very disturbing to the Hebrews of his day: Just as you forget the past, so will the future forget you. The Jewish faith is based on remembering. Remembering how God freed you from the slavery of the Egyptians, how God called Abraham to a new land, how God gave the Torah to the people, how God rescued them, time and time, from disasters.
But, Qohelet says, the people of God constantly forget what God has done.
He goes on to say that he has thought long and hard about the condition of human beings, and the prognosis is not good—at least not for him.
“It is an unhappy task, he says. An otter never thinks about what it means to be an otter. He just swims, eats, plays and breeds more otters. But people are not like that. We are capable of self-reflection. Socrates said the unexamined life is not worth living, yet Thoreau, thousands of years later said that the mass of men life lives of quiet desperation. You would think that all that examining would lead to greater happiness, but it does not seem to. “It is an unhappy business that God has given to human beings to be busy with.”
It is hard to a thinking a human. It is much easier to go with the flow, and not question anything. But Qohelet is questioning everything. He can’t help himself. For him, that is an essential part of what it means to be human, but it is one of the most unpleasant parts of being human. If you look closely at life you will see that all our effort is like trying to “herd the wind.”
It is hard because in spite of all our thinking, we cannot change very much about our world. Karl Marx once said, “philosophers have only interpreted the world, in various ways; the point is to change it.” But the world does not change. Marx envisioned a world where there were no rich people and no poor people. One hundred and fifty years after Marx there are still rich and poor, and in fact today the gap between the two has only grown larger.
What is crooked cannot be made straight. You can’t count jelly beans in an empty jar. What is will not change.
Thoughts and Questions
1. Throughout this study Qohelet confronts us with how he sees the world. Do you agree with what he says? Can things change? Or are we destined to live a world that does not change?
2. Take some time to think about how God has affected your life. Go back as far as you can in your life. How have the actions of God in your life affected who you are now?
3. Does the fact that we cannot change the world mean we should stop trying? Can we make things better? How?

1 Response to Ecclesiastes for Everyday: Day 3