Noli Me Tangere By Titian

This was painted around 1514 and hangs in the National Gallery in London.

You can find the painting on the internet at: https://www.nationalgallery.org.uk/paintings/titian-noli-me-tangere

The scene is taken from the Gospel of John, where Mary sees Jesus in the garden. Noli me tangere means “Do not touch me,” in Latin.Here is the full passage.

11 But Mary stood weeping outside the tomb. As she wept, she bent over to look[a] into the tomb; 12 and she saw two angels in white, sitting where the body of Jesus had been lying, one at the head and the other at the feet. 13 They said to her, “Woman, why are you weeping?” She said to them, “They have taken away my Lord, and I do not know where they have laid him.” 14 When she had said this, she turned around and saw Jesus standing there, but she did not know that it was Jesus. 15 Jesus said to her, “Woman, why are you weeping? Whom are you looking for?” Supposing him to be the gardener, she said to him, “Sir, if you have carried him away, tell me where you have laid him, and I will take him away.” 16 Jesus said to her, “Mary!” She turned and said to him in Hebrew, “Rabbouni!” (which means Teacher). 17 Jesus said to her, “Do not hold on to me, because I have not yet ascended to the Father. But go to my brothers and say to them, ‘I am ascending to my Father and your Father, to my God and your God.’”

This passage has puzzled scholars over the ages. Why does Jesus tell Mary she cannot touch him? Some say because she could not handle the glory of his resurrected body. Others say that she needs to reorient her way of relating to Jesus. She can no longer relate to him as a man. Now he is a resurrected being, and she needs to relate to him spiritually, echoing the words Jesus spoke to the woman at the well: “But the hour is coming, and is now here, when the true worshipers will worship the Father in spirit and truth, for the Father seeks such as these to worship him.  God is spirit, and those who worship him must worship in spirit and truth.”

Let’s talk a look at the painting, and we can see how Titian handles story.

First, we look at Jesus. Mary thought he was the gardener, and Titian has Jesus holding a hoe in one hand, to make her mistake more understandable. In Mary’s left hand is a bowl of ointment, which Mary came to use on Jesus’ corpse.

Between Jesus and Mary is his white death shroud. It acts as a barrier, emphasizing the distance between them. It is a death shroud, and death is the great separator.

The painting has two great arcs. You can see it in the black line on the painting on the side. The first  starts at Jesus’s right foot, where you can clearly see the nail marks. If follows the trajectory of his body, which is bent toward the white castle on the hill. Titain is showing the trajectory of Jesus. The line starts at his body, then moves out to the town. It covers the hill top, where people live. Mary may want to cling to Jesus, but the arc of Jesus’ life takes him to all people. If Mary clings to Jesus, she keeps him from doing what he was sent to do—be the salvation for all people.

The second arc is actually more of a bend. It follows the end of Mary’s cloak, runs through to her arm, and then takes a sharp turn upward at her hand, and follows the line of the tree, up to heaven. The sharp change in the trajectory occurs where Mary is withdrawing her hand from grasping on to Jesus.

The interesting thing here is that the angle takes her up to skyward, following the tree (Tree of Life, perhaps?) up to heaven. If her hand was reaching for Jesus, instead of bent upward, her trajectory would be more earth bound. In the John passage here, Jesus talks about having to ascend to his Father. In her obedience to Jesus, by not touching him, by not clinging to his earthly body, she has set her trajectory toward heaven. 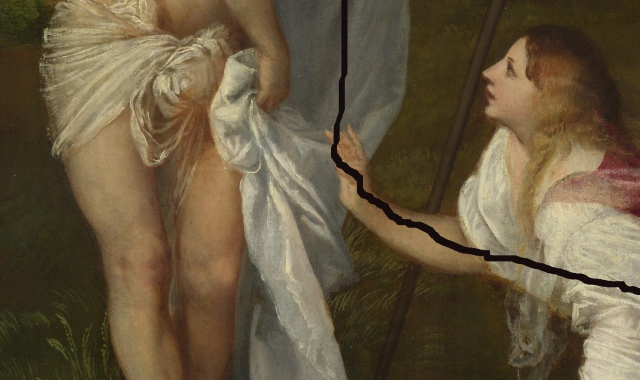 It may seem strange that Mary must let go of Jesus to gain the salvation that comes through him. Are we not supposed to cling to Jesus? Yes, if by that we mean to be near him, to follow him, and to give our lives to him.

But there is another way people cling to Jesus. Their clinging is meant to hold Jesus in place, to limit him. We are supposed to follow Jesus. Sometimes we cling to him to keep him place, which means, if he can’t move,  we don’t have to move either. Jesus had left Mary once, when he died, and now that she had him again, she didn’t want to lose him. So she hung on to what she thought was Jesus’ physical body. But Jesus had other, greater ideas. When he was on the earth, he was always on the move, and in his post-resurrection state, he still will not stay still.

In other words, it is important we let Jesus be Jesus.