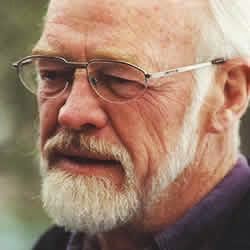 To avoid being swept along by the winds of change and conducting a ministry which is mostly improvisation, one must stubbornly one’s heels into the ground.

More than once I have told people I perform my ministry standing on the shoulders of giants. There have been many giants in my life, but, when it came to the helping me understand and meet the demands of pastoral ministry, few have loomed larger than Eugene Peterson, died on Monday of this week. I originally went to seminary with the intention of going on for a Ph.D. and entering that hallowed halls of academia. It was not until my senior year of divinity school that I began to realize I would be following a different path, one that led into the parish. I was desperate for resources to help me in practical ministry, since I had spent most of my time studying “serious theology,” and Peterson was just the ticket.

The summer I graduated, I read Five Smooth Stones for Pastoral Care. To say that changed my whole approach to ministry would be an understatement. It took me from being the leader of my college Inter-Varsity chapter, to becoming a pastor, two very different things.

I found Peterson appealing for a variety of reasons.

He was incredibly well read, and as a reader, I respect that. I mean, how can you not love a man who pencils into his calendar a regular, two-hour appointment with FD three afternoons a week? (FD–Fyodor Dostoevsky, and he spent that time reading his novels.) Or who writes, “The first book on pastoral care that meant anything to me either personally or vocationally was Ulysses, James Joyce’s novel.” He was a sharp reader and taught me to be one. He taught me how take the books I was reading and apply to pastoral care. “Now, when I come across dull people,” Peterson wrote in Under the Unpredictable Plant, “I inserted into one of the novels to see what Dostoevsky would make of them. It wasn’t long before the deeper dimensions developed, the eternal hungers and thirsts—and God. I started finding Mozartian creativity in adolescents and Sophoclean tragedies in the middle-aged. The banality was a cover.”

He opened up these, and other authors, many of whom I had read before. But he brought them alive in a fresh new way. I remember the day I read his take on Wendell Berry—every time he used the word agriculture, Peterson wrote, substitute the word church. After that Berry become my second favorite writer on church work.

Peterson taught me a new way to approach the Scriptures. The two books I have mentioned were both developed out of exegesis. The five smooth stones of the title are five books of the Bible that can inform our pastoral care: Song of Songs for prayer. Ruth for story-making, Lamentations for pain sharing, Ecclesiastes for nay-saying, and Esther for community building. Under the Unpredictable Plant is in depth study of Jonah. Peterson wrote books on the Psalms, Jeremiah, more on the Psalms, and yet more on the Psalms. He taught me to pray the Psalms, not just read them. His exegesis was wide and rich. While he was always faithful to the text, he enlarged it for his readers. I learned to preach the way he wrote—taking a text very seriously, but also the context of the people hear the text. When I say he was faithful to the text, I do not mean he had a slavish devotion to the Bible. He surrounded himself in the text, he danced with it, he fought with it, and most of all, it was abundantly clear that he loved it.

Peterson taught be the value of long-term stability. In my thirty years of ordination I have seen many fads come and go. There was a time when we were all purpose driven, a time we were seeker friendly, a time when we were missional, a time when we were effective leaders, when we were servant leaders, when we were Emergent. We have four disciplines, then five, seven habits, and twelve keys. At one time everyone who came for pastor care was codependent. After that they were addicted to various things. Some were from Mars and some were from Venus. Most had been on the Road Less Traveled. In the flurry of such trends, Peterson reminded me that some things never change, and that there was more to gain by looking back than by just looking around. He taught to see the church, not as a project, but as a living organism, each with its own organic center. He taught me that each church was set in a certain soil, and some soils did grow some plants. He taught me to take the long view—the long view forward and the long view back. Being naturally attracted to “the latest thing,” this was probably Peterson’s best legacy to me in my ministry. Slow down. Listen to people. Study people. Know the Word. Know your church.

Peterson is best known today for his translation The Message. But for me his work about the Bible and his work on pastoral care were life changing. He was first and foremost a pastor. Yes, he was a writer. Yes, he was a sought-after speaker. Yes, he was a Bible translator. But above all that, he was a pastor. And I am a better pastor for having read him. And a better Christian.

I am the pastor at the First Presbyterian Church in Medford, Oregon. I believe that faith should be able to sustain us, not oppress us.
View all posts by tmrichmond3 →
This entry was posted in Church, Eugene Peterson, ministry, Musings, Pastoral Ministry, Wendell Berry and tagged Eugene Peterson, ministry, Pastoral Ministry, religion, Spiritual Growth, spirituality. Bookmark the permalink.